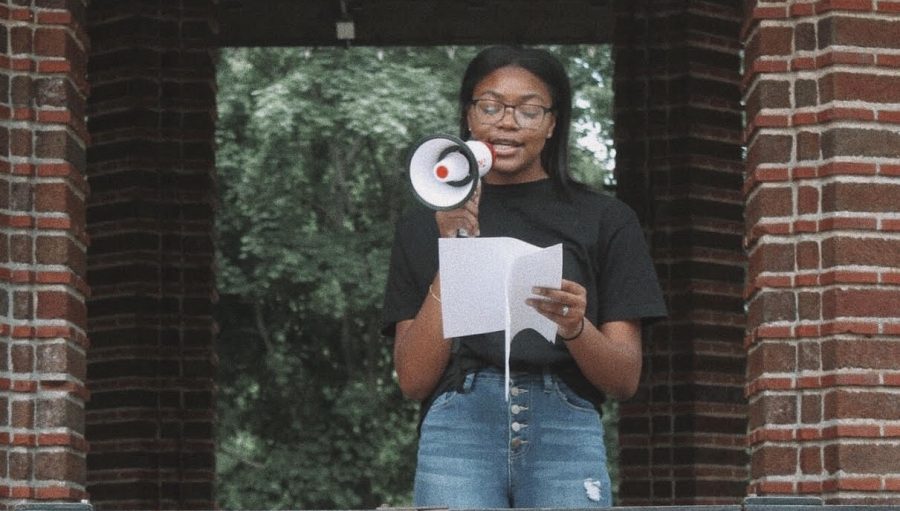 Many Franklin residents gathered at the Common on June 2nd, to peacefully show support for the Black Lives Matter movement and stand against police brutality.
At the protest, people knelt for nine minutes to honor George Floyd, a Black man who recently died at the hands of police in Minneapolis.
After the nine minutes of silence, several speakers came up to talk about Black Lives Matter. Two of these were FHS students Ndoumbe Ndoye and Kianna Thomas.
In her speech, Kianna asked for us to unite against racism, instead of fighting one another.
“I wanted people to understand that this is not a black people versus white people issue, black people against the police issue, or even a democrats against republicans issue. This is an us against racial injustice and systematic oppression issue,” she says.
Kianna has also started a youtube channel about how to be involved in activism and start your journey to awareness. Her channel will break down social justice issues to spread awareness.
Kianna believes that the best way to support Black Lives Matter is through education. Racism in the justice, healthcare, and education system should be learned about, so it can be stopped.
“As a Black girl who has lived in a predominantly white area for the majority of my life, I have struggled with being comfortable in my own skin,” Kianna spoke on why the Black Lives Matter movement is important to her.
“Today, I use my skin as my shield, I am realizing the power and beauty that my skin and roots hold. The Black Lives Matter movement empowers Black people while also welcoming White allies which really is bringing us to a better world.”