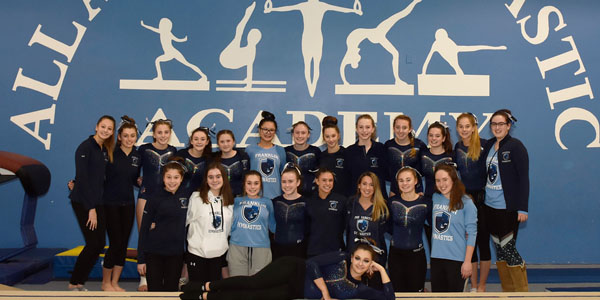 High school and club gymnastics both share the same love for the sport, but many attributes separate them.

Skill-wise, high school gymnastics is out of regular level 9 requirements, and club can be any level depending on the skill range and team you take part in.

Franklin High School gymnastics and Flipside Xcel coach Paula Lupien has her own perspective about the two teams. Paula initially got involved in gymnastics through her daughter, sophomore, Lexi Lupien.

“I’m sitting here a lot I might as well start coaching,” Paula stated about watching all of her daughters’ recreational gymnastics classes.

She began by coaching recreational gymnastics and then got certified in training. She eventually worked her way up to her current position as an Xcel coach in Medway.

She stated,“I prefer high school gymnastics because of the encouraging atmosphere, team, and the ability to be in the life of teenagers. I like to think that I can be an important aspect in their life that not only influences them in the gym, but outside of it as well. I love to be there for the girls throughout high school which can be tough years.”

The main difference in the teams is that club is more for yourself to achieve personal goals, while for high school you need to be dependent on your team because so many individual scores count towards winning and losing. The overall team score for club depends on only three scores, while high school depends on six. Coach Lupien personally recommends high school gymnastics.

She says: “It’s important to be a part of your community, and contribute to the culture of your high school. I feel that club takes away from the high school experience.”

Rylee Dooney, Captain of the Franklin High School gymnastics team and an Xcel Platinum gymnast at Flipside, believes the same as coach Lupien. Rylee began gymnastics when she was eleven years old and began the Xcel program when she was around thirteen years old. It was not until her freshman year that she was introduced to the Franklin High School gymnastics program and regained her love for the sport.

Rylee says, “I’ve been around the team so much they have become family.”

However, there is a crucial difference between the two sports.

Dooney admitted: “I am so lucky to be a part of such an encouraging team that honestly wishes the best for one another, which isn’t always the case in club gymnastics. In club gymnastics, they are your teammates, but at the same time, you’re competing against them if they’re in your age division. So as an individual competitor you really want to do your best.”

Both activities have the similarity of the training and discipline, but bring across different environments for each gymnast.