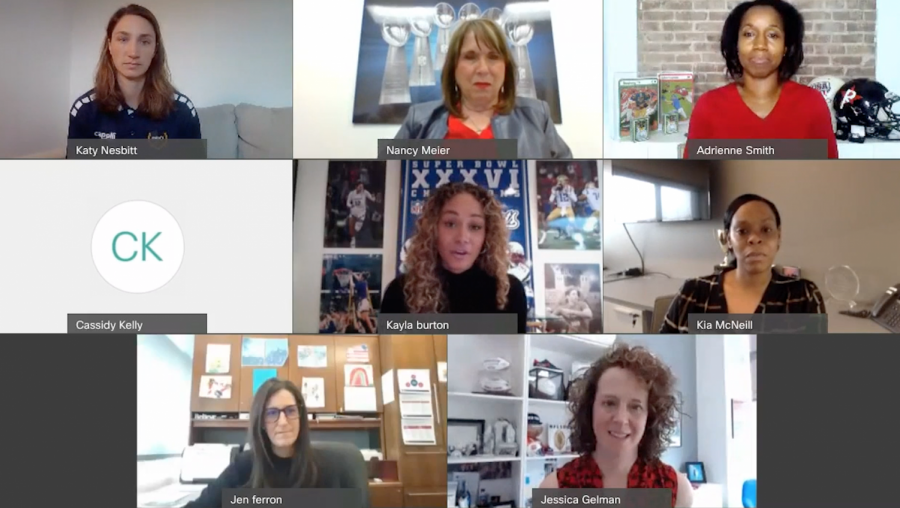 Women are, without a doubt, capable of doing everything that men can do.  Unfortunately, the sports industry remains, for the most part, a male-dominated industry, and women have been fighting for equal opportunities and respect for a very long time.  On Thursday, March 11, Craft Sports held a panel featuring seven accomplished, determined women who have succeeded in the sports industry despite the boundary that their gender may have presented them with.  These women shared their views on being a women in sports, having to balance work with home life, and the qualities of a leader, as they led an interesting and engaging hour-long panel.

One of the most prominent topics of conversation in this discussion was getting respect as a woman.  Kala Burton, sports anchor for Western Mass News and Sports, and panel moderator, asked the panelists “How do you get men to respect you, and how do you prove to them – hey, I’m just as much of an athlete as anyone else here.”

Katy Nesbitt, Assistant referee of Major League Soccer, had an intelligent response: “I think that’s definitely one of the barriers that women have to break through, and I think that we’re still working through it.  We are still working on gaining that same level of respect, and I think that as a woman, I’ve sometimes felt that maybe I don’t belong here and we can do that to ourselves sometimes, so it’s first about finding the respect in yourself, and once you have that, it will come out and be seen by other people. We work hard as women!  And that work effort is seen.  It’s something that we need to keep reminding ourselves about.”

Imposter syndrome, which can be generally described by doubting your abilities, or feeling fraudulent, is not uncommon among women.  A recent study in 2020 reported over 75% of women in executive positions having felt imposter syndrome at some point in their career — despite having countless achievements and accomplishments.  Imposter syndrome is something that millions of people – men and women both, experience, but as Katy Nesbitt said, having respect for yourself is important, and crucial to further your career.

Finding balance between work and home life was another prominent topic of conversation in this panel, and the panelists had many sharp responses.  Adrienne Smith, wide receiver for Boston Renegades, and Founder and CEO of Grid-Orion Queendom, emphasized time management skills, and shared her thoughts on finding balance and happiness in day-to-day life. “I had a little bit of a breakdown in 2012-2013, where I just started crying because none of the initiatives I had worked so hard for were working, and my best friend said to me ‘Well, what do you think life is like for Oprah?  I mean, Oprah, Beyonce, do you think they’re sitting around and crying because things aren’t working, and they can’t get anything accomplished?’  She said I had to get my time management in order – so I dried my tears, went to Barnes and Nobles, and picked up a book on time management.  Now, I have a spreadsheet where I block out time, and it allows me to accomplish my different endeavors.”  Time management is no easy task, and one would think that adding family into the picture makes it harder, but Jessica Gelman, CEO of Craft Analytics group, says otherwise: “I’m really fortunate with my wife, who is the best person I could have ever chosen.  We work together!  We have a calendar, and we split up all our work.  The thing about sports and your personal life is communication, and having expectations.”  Finding balance is a challenge that everybody – students, athletes, gamers, etc. face.  Setting up a schedule for yourself is a great way to manage your time, and Barnes and Nobles has no shortage of self improvement books.  More than anything, it is important to ask for help when you need it, and reaching out to family/friends is an amazing way to help manage your time.

Leadership is not an easily acquired skill, but it is one that all these women have, and they all make sure to keep in their toolbox.  Burton presented the question “What does it mean to be a leader?”, and the panelists had some well thought out responses.

Kia McNeil, the head of the women’s soccer team at Brown University, said “I think some of the best leaders that I’ve had the privilege of working with, including both men and women, are people who gave value to everybody in the room – who really empowered the people around them, who lifted them up, and were collaborators.  People who wanted other ideas and they didn’t run their programs like dictators, they wanted to give everybody in the room value.  Those are some of the best leaders I’ve ever had, and those are the type of people I try to emulate and learn from.”

Leadership is the promotion of your team – It takes more than smarts to be a good leader.  In order to successfully lead a team, somebody needs to have the best interest of the group at heart, and be willing to hear out everybody in the room.  Adrienne Smith’s response to this idea went hand in hand with Kia’s. “The definition of leadership for me is servitude.  It might seem like an oxymoron, but I believe that a leader is really out to serve a community, or to serve a greater purpose.  They do that by putting their teammates in the best position to succeed.”  There you have it.  Having positions such as a team captain, gives you an opportunity to be a leader for the rest of your team, but you have to remember that understanding your team as a whole, and setting up your entire team for success, is the ultimate goal of your position.

This panel is up on the New England Patriot’s Website, and I would highly recommend listening to this inspiring conversation between these amazing, influential women in sports.