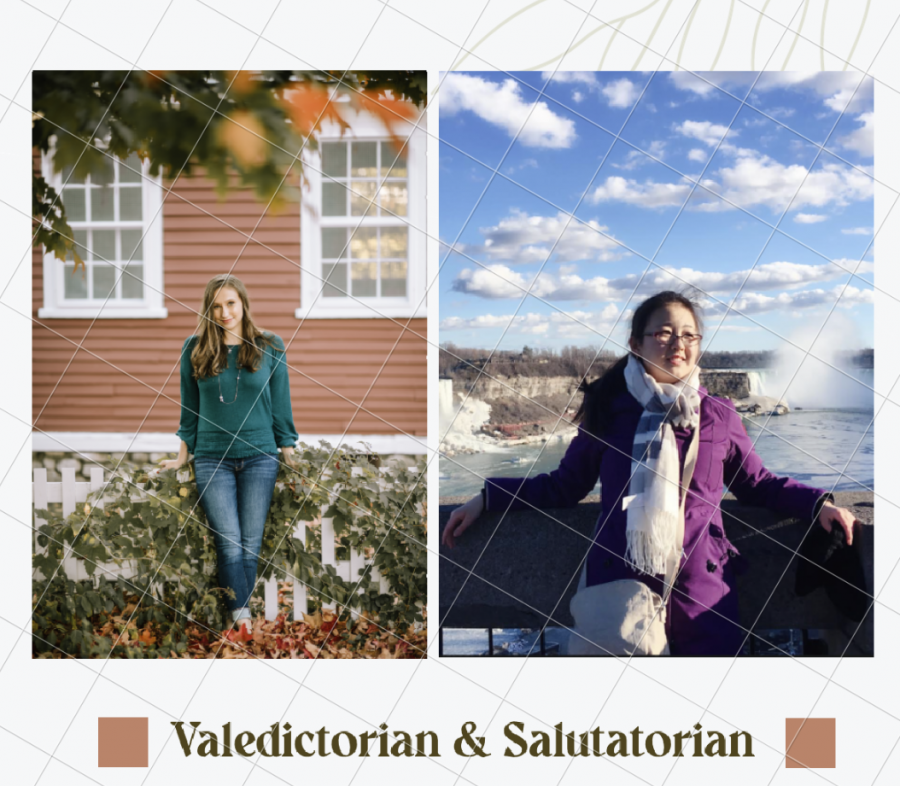 Congratulations to Carolyn Hagy and Elaine Pu for being named Valedictorian and Salutatorian of the Class of 2021! Pantherbook reached out to both girls to hear their thoughts on this amazing accomplishment and learn more about how they achieved this!

Throughout high school, Elaine has always been described as a devoted and goal-oriented person. Elaine will be attending Dartmouth College in the fall. She is not 100% sure what she is going to study yet but she is eager to explore more topics like psychology, art, biology, computer science, and Latin.

Considering that she is the Class of 2021’s salutatorian, Elaine believes people would be surprised to hear how she manages her time.

“To be completely truthful, I don’t think I manage my time really well … I make to-do lists on Google Docs to keep track of tests and assignments, which was very helpful, and taking Psychology helped a lot with my time management as well; I remember my class reading and talking about learning, memory, and study skills.”

She also includes some of her study habits that she used when taking many AP classes.

“I took a fun personality quiz and found out that I’m a visual learner, so I like to take notes, highlight, study Quizlets, etc.”

In addition, she states that she also likes to plan and she would try to plan out when she would study and set apart time for each study session for different classes. “Sometimes my plan breaks down and I end up watching shows and movies for the whole day!” she remarks.

Elaine says that she has had tough times with classes just like everybody else. She says that sometimes the amount of homework and assessments can be a little overwhelming, and there are always concepts that are challenging in each class, but she says that she is lucky to have had teachers and peers who are fun and encouraging, so most of the time, classes were very interesting.

As far as pressure of being salutatorian, Elaine explains how she “didn’t feel a lot of pressure. I have very supportive classmates and I feel that the atmosphere in my classes and this school, in general, is more collaborative than competitive.”

She adds that she still isn’t sure how she became a salutatorian but she states that she couldn’t have done it without “the incredibly kind and supportive teachers and classmates at FHS. I’ve met so many amazing and talented people during these 4 years, and I’m truly honored to be a part of such a wonderful class.”

Over the past years, Elaine has loved a lot of classes and appreciates that FHS has classes across many different disciplines. She says that she would “recommend Psychology. I got to discover things about myself and people in general which changed my thought process and perception in many ways. I also really enjoyed my art classes”. She took portfolio, drawing and painting, and sculpture, which taught her how to think creatively and flexibly, which she believes was immensely helpful for other classes as well.

Ultimately, Elaine believes that her motivation came from one of her favorite quotes from the show, Frasier, that being, “In the end, what we regret most are the chances we never took.”

She believes that this motivated her to always try her best even though she might not do well, but she says that sometimes this isn’t enough; “I remember sometimes being discouraged because I didn’t understand a concept or didn’t do well on assessments, but my teachers always encouraged me to keep trying and even took time out of their schedule to meet with me before or after school to go over assignments and questions, which I am very very grateful for.”

Thank you so much Elaine for sharing the path to your accomplishment and we wish you the best of luck in college!

Throughout high school, Carolyn has always described herself and been described as a perfectionist. She took a total of 12 AP classes and did many extracurriculars as well. She will be attending Boston University in the fall and will be majoring in human physiology on the pre-med track.

She says that she wants to “continue [her] synchronized skating career but [she] also wants to attend medical school after college and eventually pursue a career in either non-surgical sports medicine or orthopedic surgery for athletes.”

“As an athlete who suffered an injury requiring surgery, I would also love to do clinical research on non-surgical methods to treat muscle/tendon tears reducing recovery time,” Carolyn adds.

Carolyn is a competitive synchronized figure skater, triathlete, member of Girl Scouts, and founded Project Join the Game, a project designed to encourage children to stay in sports into high school and beyond.

Because of her jam-packed extracurricular schedule, Carolyn became an excellent time-manager. She says that she was taught early in her education to stay organized, make lists and keep a detailed planner. She learned to budget her time wisely and prioritized what to focus her attention on.

“I admit that I am a bit of a perfectionist, but I had to accept that it is just not possible to put 100% into everything all the time!”

Of course, everyone has had tough times in school as well. Carolyn mentions how in almost all of her classes there were a few weeks that were extremely fast paced and overwhelming. She would feel like the work was impossible to finish, but she pushed through, even if it meant that she didn’t get very much sleep. She did her best to push through to the end and not let her grades slip, especially focusing on senior year, when many seniors are afflicted with senioritis.

As for being valedictorian, there is a lot of pressure that comes with it and, she states that, “I am very proud of what I have been able to accomplish throughout high school, but there is definitely a lot of pressure with giving a speech at graduation. Graduation is such an important day for everyone in my class including myself, so I want to give a meaningful speech that will fit with the theme of the ceremony.”

She says that writing her speech has been pretty difficult, because she wants to make sure she says the right things! The Class of 2021 is full of amazing people and she wants them to be happy with what she has to say.

When asked for study tips, Carolyn says that she is a strong believer in studying by spaced repetition. Many AP classes have an overwhelming amount of vocabulary or formulas that need to be memorized. She usually approached this with flashcards and/or a Quizlet, but she states that the “most important thing was to review often and for shorter amounts of time”.

In math/science AP classes, she found that repetition with practice problems was the key to success. After all, the College Board has a very specific style of questioning that is consistent on every exam (and teachers usually use past questions for practice).

She says, “I think that the best classes are the ones that truly interest you. Personally, my favorite classes were AP Biology, AP Physics, Anatomy and Physiology, and Forensic Science. However, if someone is more interested in History or English, they should take those classes and not fill their schedule with classes they are going to hate.”

Ultimately, Carolyn believes that she has always been a perfectionist and that it would “go against [her] nature to not do [her] best work on everything” so she mentions that, “It is extremely rewarding when hard work pays off with success.”

Thank you so much Carolyn for sharing the path to your accomplishment and we wish you the best of luck in college!