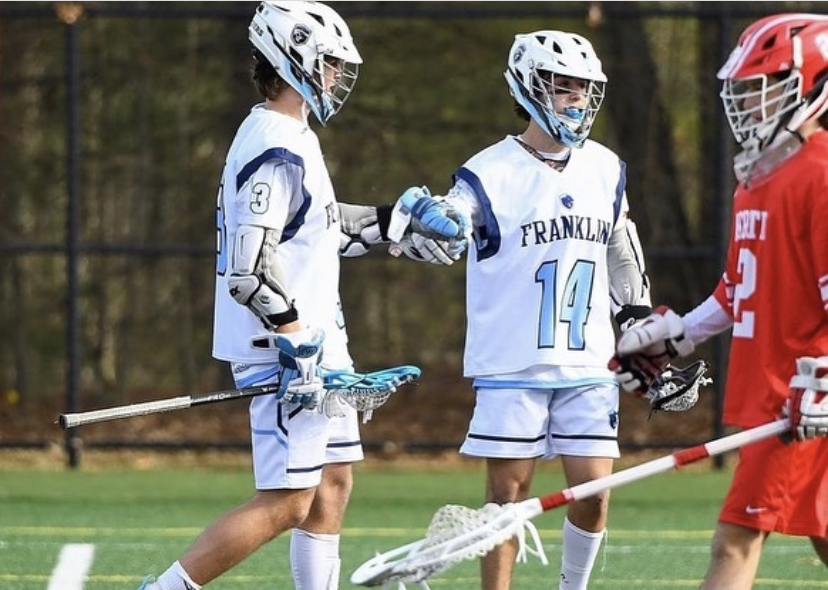 FHS Jr. Captains Luke Davis (#3) and Jayden Consigli (#14) fist-bump after a goal against North Attleboro. The two have been critical to Franklin’s 3-0 start.

The Spring season is here, and picking up where they left off from last season is FHS Boys Lacrosse. After a 2021 in which the Panthers went undefeated until a loss in the D1 South Final, expectations for Franklin this season are sky-high. Even with graduating 13 players last year, the team has its sights set on building off last year’s success. While everything seems to be clicking for Franklin through the first three games, I caught up with FHS Boys Lacrosse Captains Luke Davis (Jr./A) and Jayden Consigli (Jr./A):

Ryan Martin: Let’s start with expectations coming into this year – After an 18-1 season, soured with a D1 South Final loss to BC High, Is it fair to say the expectation for Franklin this year is to be back in that D1 South Final game? If so, what takeaways from that BC High loss will be crucial to learn from?

Luke Davis: Yes, this year we expect to make it back to the South Final game in hopes of winning it and playing for that State Title. One key takeaway from the BC high game that we learned was to not get too ahead of ourselves and take everything play by play. It is ok to play from behind as long as you are slowly chipping away at the difference.

Jayden Consigli: Yes, I think we have as much chemistry as we did last year, even with the loss of key seniors. We all believe that if we continue to build our team chemistry and continue to play as a team, then we should be back in that D1 South Final game. One takeaway I learned from that BC High loss is that it’s just another game. Yes, the stakes are high, but being composed in a game like that makes a huge difference and allows you to play the game like it’s no different than any other game. I think if we are in that game again, we will be more than ready to compete with the best.

RM: Coming off a 300-goal season, the attack has stayed hot, scoring at least 22 goals in each of the first three games this season. Even while graduating Matt (Lazzaro), Owen (Kielty), and Joe (Consigli), how have you guys been able to stay consistent in dominating the scoreboard?

LD: Tyler, Jayden and I have all been playing together since we first started between club and town lacrosse. It has given us so much time to grow our chemistry and discover our strengths. We can always count on each other to make the right play and be in the right spot eventually leading to step-downs or goals right on the crease.

JC: I think our team has a very high lacrosse IQ and no one on our team is selfish. From practice to games, everyone is always looking to make the extra pass, extra cut, etc. Having a high IQ is huge, when everyone knows to space and when to cut, it makes it a lot easier on everyone on our team and it makes everyone a threat to score.

RM: Going back to losing a couple of key pieces from last year’s run, Franklin graduated a lot of talent last year with 13 members of the ‘21 class. As captains, how impressed have you been with younger guys’ abilities to step up and fill the void left by that 2021 class?

LD: The underclassmen all worked really hard in the offseason becoming much better players than before. With so many seniors who graduated in 2021, many spots needed to be filled. Every underclassman has stepped up and it is very impressive to see how much they’ve already grown.

JC: The sophomore class has been huge for us, especially on the offense and goalie sides. With a young talented midfield line and a strong goalie, I can see us competing with most teams we play. Playing with that senior class was special, but I know if we keep working with the younger guys, we will be right where we left off.

RM: Franklin right now seems to be clicking on all cylinders. Much of this early season success was expected, but what part of this team’s success has surprised you the most so early into the season?

LD:  One part that surprised me is how quickly our offense has begun to click. At first, I was unsure how long it would take to get going with almost a totally new look. But everyone has worked well together and is continuing to improve every practice/game.

JC: With the loss of that senior class, I didn’t know what to expect our offense to look like. A lot of our offense was generated from [the ’21 class] but being a couple of games into this season, I don’t see our team having a problem with that: The IQ of our team makes it very easy to run plays and play as a team.

RM: Looking at your schedule so far, Franklin has had their way with three Hockomock opponents, beating Attleboro, Milford, and North Attleboro all by at least 16. In terms of competition, it looks like non-league games will be tougher competition than Hock matchups. With such high expectations for this team, how tough is it to stay humble and not get complacent when beating up on teams you know you’re better than?

LD: We play every game like we’re playing for a championship. Every team’s goal in the Hockomock is to beat Franklin and we will always get their best game. We have one of the toughest schedules Franklin has ever had outside the Hockomock league, meaning we need to get better every game in order to be ready for the top teams in the state and playoffs.

JC:  Our coach makes it clear that even if we think we are better than the team we play, we have to prove it on all cylinders. With the success we have had so far, no one on our team seems complacent knowing that we still need to prove more. From ground balls, clears, etc; we need to play every game like it’s our last because when bigger games come, we will be ready.

Looking to stay undefeated, the boys will be at Sharon tomorrow to take on the 1-4 Eagles. With a +57 goal differential, Franklin will look to build off their picture-perfect start through the rest of the regular season.