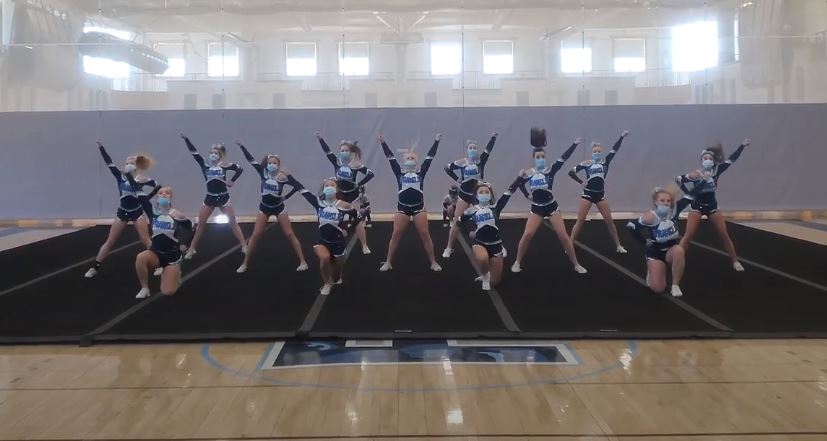 Members of the FHS Varsity Cheerleading team strike a pose during their performance for the 2021 Fall II Hockomock League Championship.

Cheerleading competitions: massive gatherings of teams from all over, with crowds of parents and supporters packed into stands to watch the cheerleader’s routines. Of course, because of coronavirus restrictions, cheer competitions looked a lot different this year.

Although the cheer team typically competes in the Fall and Winter seasons, the MIAA changed the timeframe to be Fall II and Spring. In a regular season, the FHS team would compete in several invitational competitions before heading to Hockomocks (then, if all goes well, Regionals and States). This season, there was only one competition: Hockomocks.

After being denied a chance to compete for the Division I state championship when COVID struck last March, many members of the team were crushed, but they were eager to get back on the mat and prove themselves.

“We were struggling for most of the season, but we definitely came together in the end!” says junior Alayna Bond.

The competition was virtual this year; however, the team only had one shot to record their meticulously choreographed routine. There was no retaking the video if a stunt were to fall or the pyramid were to crumble. Months of hard work led up to this 2.5 minute performance.

The routine was constantly tweaked throughout the season, but it had to be reworked extensively only a week before competition day when some people had to quarantine. The average audience member would be hard-pressed to notice that dramatic last-minute changes were made, since the routine went off almost without a hitch.

Franklin Panthers won’t be stopped! We claw and scratch to the top!”

On April 26, it was announced that, for the second season in a row, the Franklin High School cheerleaders were Hockomock Champions! The hard work had payed off.

“We had less practices because of COVID, so we had less time, but we still managed to pull it together,” junior Kaleigh Dooney notes.

But the girls weren’t done yet. That same day, they began practices for the Spring season, which will culminate in another Hockomock League competition and hopefully a State Finals competition. Wish the team luck as they once again jump, tumble, and stunt their way to success.